A CASE OF OBEDIENCE 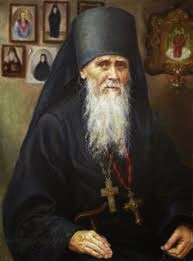 A CASE OF OBEDIENCE
A selection from the book “The Life and Instructions of Saint Ambrose of Optina. ”
Not long before the repose of Elder Ambrose, about two years, I had to go to Optina to collect some money. We had made an iconostasis there, and I went to get the payment for our work, a rather substantial sum of money, from the superior. I received the money, and before leaving went to get a blessing from Elder Ambrose for the trip home. I was in a hurry to get back because the following day some people were coming to place a large order, amounting to several tens of thousands.
That day there was as usual a packed crowd of people waiting to see the Elder. He was told that I was waiting, and through his cell-attendant gave instructions that I was to come to him that evening for tea. Although I was anxious to get on my way, the joy and honor of being invited to have tea with the Elder overweighed all other considerations, and I decided to postpone my return trip until the evening, certain that if I travelled all night I would make it home in time.
Evening came and I went to the Elder’s cell.
He was so cheerful, so joyous: I scarcely felt the ground beneath my feet. Our Batiushka detained me quite a long time. It was already dusk when he said to me, “Well, go with God. Spend the night here and tomorrow I bless you to go to the Liturgy. Afterwards come here for a cup of tea.”
How is this possible? I thought to myself. But I didn’t venture to contradict the Elder. I spent the night, attended the Liturgy, and went to the Elder’s for tea—all the while fretting over my customers. Still, I thought, I could make it back by evening and maybe they’ll still be there. Don’t bet on it! I finished drinking tea and wanted to say to the Elder, “Bless me to go home,” but I didn’t have a chance to say a word. “Come tonight,” he said, “and spend the night with me.” I felt as though my legs were about to give way but still I couldn’t bring myself to object.
A day went by, and the night. In the morning I felt bolder and I made up my mind, “Come what may, today I’m leaving. Who knows, maybe my customers waited a day for me.” But just imagine! The Elder didn’t give me time even to open my mouth before he said to me, “Go to Vespers tonight, and tomorrow to Liturgy. Spend the night with me again tonight!” Was he playing games with me? At this point I was really annoyed and, I have to admit, I even sinned against the Elder. Some clairvoyant, I thought. He’s sure to know that thanks to his kindness I’ve missed a really good deal. That evening at Vespers I was in no mood to pray. Knocking about in my head were thoughts like “That’s your elder for you! That’s your clairvoyant! Your income has gone whistling.” I was really in a temper.
As if to compound my sin, the Elder, as if—forgive me Lord—to mock me, greeted me after Vespers with such joy. I felt offended, bitter. In the same mood I spent a third night. That night my distress gradually calmed down: water under the bridge. In the morning I came to the Elder. “Well, it’s high time you went home. Go with God! God bless you! And in time don’t forget to thank Him!”
Here all my distress simply melted away. Leaving Optina, I felt so light-hearted, so joyful that it’s impossible to de-scribe. But what did Batiushka mean, “In time don’t forget to thank God”? It must be, I thought, because I was granted to attend the Divine Liturgy three days in a row. I didn’t even rush home, nor did I give a thought to my customers. I was so grateful that Batiushka had spent so much time with me. I arrived home, and what do you suppose? No sooner had I passed through the gates than my customers rode in after me. They were three days late for our scheduled appointment!
But wait, this isn’t the end of the story. Just listen what happened later. Time passed. Our dear Elder Ambrose died. Some two years after his righteous repose my senior workman died. He was a trustworthy fellow; I wouldn’t even call him a worker: he was pure gold. He lived with me for more than twenty years. Then he became ill unto death. We sent for a priest, so that he could have Confession and receive the Mysteries while he was still conscious.
Then, from the bed of the dying man the priest comes to me and says, “The sick man is calling for you; he wants to see you. Hurry, before he dies!”
I go into his room and he, as soon as he sees me, with difficulty props himself up on his elbows, looks at me, and sobs: “Forgive my sin, master!
I wanted to kill you!” “God be with you, my dear fellow! What are you saying? You’re raving!” “No, boss, I really did want to kill you. Do you remember when you were three days late in returning from Optina? Three of us, according to my plan, waited for three days to ambush you from under the bridge. We were greedy for the money you were bringing from Optina in payment for the iconostasis. You would have lost your life that night, were it not that the Lord, on account of someone’s prayers, saved you from death without repentance. Forgive me, the sinner. For God’s sake let my soul depart in peace.” “May God forgive you, as I forgive!”

The sick man groaned, and died. God rest his soul…

Lord, as Thou wilt and as Thou knowest, have mercy on me.St. Macarius the Great of Egypt ,a lover of wisdom