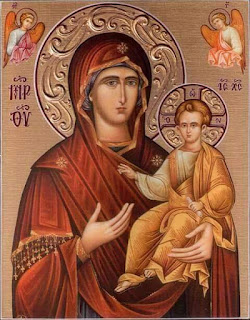 THE WHOLE WORLD watched with shock the terrorist attacks of fanatical Islamists in London [7th July, 2005], which brought death and disaster to the unsuspecting citizens on that morning in July.

From beneath the ashes and tears, a particular voice made an impression on us. It was the voice of the Greek driver of the fated bus, George Psaradakes. He was an experienced driver for London’s Urban Transport. On that morning he began his shift. He set out on his usual route on bus 30, just as he had been doing so many years. Suddenly he heard an explosion!
When he looked back, he realized that he was the only one on the bus who had not been injured. His passengers were either killed or seriously injured. The sight was horrible and indescribable. He, however, came out unhurt.
As soon as he recovered from the immediate shock, he spoke to the reporters. Then he revealed his “secret” to them: “I was saved by a miracle! I always carry an icon of the Theotokos the Directress on me. I also had it with me on that Thursday morning. The Panagia saved me. I thank her.”
That was the confession of the Greek driver, who found himself in the center of mourning, destruction, blood and horror, and yet had not even one scratch on him.
Fanaticism had converted a young Moslem into a “kamikaze,”a suicide terrorist. He took so many souls to death with him.
But the Panagia worked a miracle. The faithful Orthodox
George Psaradakes was saved. “Thy faith hath saved thee.”
http://apantaortodoxias.blogspot.com/2018/11/a-miracle-of-theotokos-directress-in.html?m=1
IN ENGLISH, MIRACLES In English, MIRACLE OF VIRGIN MARY, MIRACLES

The oldest hymn to the Theotokos

When God is obliged