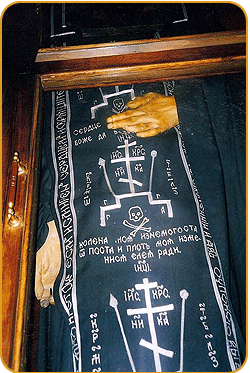 This is my postscript to this miracle of the Trinitarian God.  Please compare this with Genesis 18:1-8.  “Then the Lord appeared to him by the terebinth trees of Mamre, as he was sitting in the tent door in the heat of the day. So he lifted his eyes and looked, and behold, three men were standing by him; and when he saw them, he ran from the tent door to meet them, and bowed himself to the ground, and said, My Lord, if I have now found favor in Your sight, do not pass on by Your servant.  Please let a little water be bought, and wash your feet, and rest yourselves under the tree. And I will bring a morsel of bread, that you may refresh your hearts. After, you may pass by, inasmuch as you have come to your servant.  And they said, do as you have said.  So Abraham hastened into the tent to Sarah and said, quickly, make ready three measures of fine meal; knead it and make cakes. And Abraham ran to the herd, took a tender and good calf, gave it to a young man, and he hastened to prepare it.  So he took butter and milk and the calf which he had prepared, and set it before them; and he stood by them under the tree as they ate.”

Whenever you are in pain and are afflicted, call to mind Him Who was Crucified and then you will find much relief.

Silence should be kept secretly and in your heart

The Theophany of Our Lord and God and Savior Jesus Christ, St. Nikolai Velimirovic