Abba Sisoes at the tomb of Alexander the Great 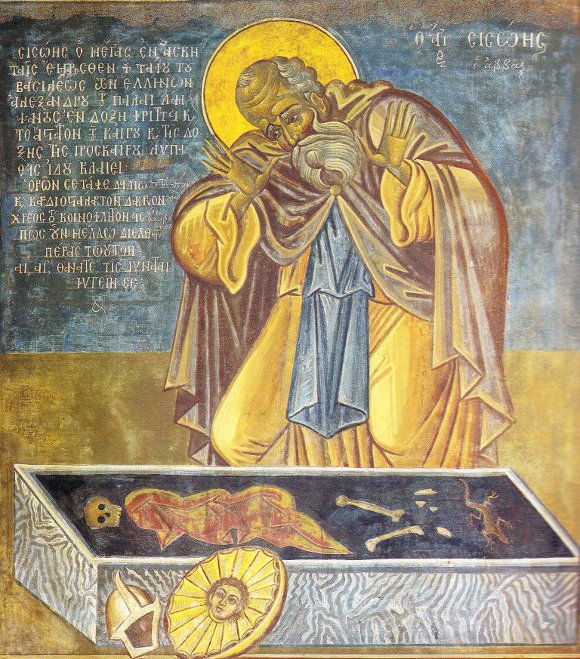 St. Sisoes was renowned for his wisdom, repentance, his faith in God and particularly for his humility. Through his labours, St Sisoes humbled himself immensely and God gifted him with a wealth of grace so that he was able to heal the sick, drive out unclean spirits and even resurrect the dead while being a source of living wisdom for monastics and laymen who came to him for counsel and advice. He is commemorated by the Church on July 6, passing from this life in 429 AD at very old age. He was a solitary monk, pursuing asceticism on the mountain of St. Anthony the Great and prior to that for a long time in the Scete of Nitria.

Abba Sisoes although extremely strict with himself was very merciful and compassionate to others and received everyone with love. If necessary would break his personal fast with guests, especially if they had travelled a distance to see him. To those who visited him, the saint first of all always taught humility. When a monk told him that he has a constant remembrance of God, St Sisoes remarked, “That is no great thing, my son, but it is a great thing to regard yourself as inferior to everyone else. This leads to the acquisition of humility.” To another brother he said: “He who knowingly possess humility fulfils the whole of Scripture”

Abba Sisoes also stressed the importance of repentance and trusting in God’s mercy and willingness to forgive. When a brother asked, “I have fallen, Abba; what shall I do?” The elder said to him, “Get up again.” The brother said, “I have gotten up again, but again have I fallen.” The elder said, “Get up again and again.” So the brother asked, “How many times?” The elder replied, “Until you are taken up either in virtue or in sin.”

His humility and longing for repentance was epitomised by the manner of his departure from this life. When he lay upon his deathbed, the disciples surrounding the Elder saw that his face shone like the sun. They asked the dying man what he saw. Abba Sisoes replied that he saw St Anthony, the prophets, and the apostles. His face increased in brightness, and he spoke with someone. The monks asked, “With whom are you speaking, Father?” He said that angels had come for his soul, and he was entreating them to give him a little more time for repentance. The monks said, “You have no need for repentance, Father” St Sisoes said with great humility, “I do not think that I have even begun to repent.” After these words the face of the holy Abba shone so brightly that the brethren were not able to look upon him. St Sisoes told them that he saw the Lord Himself. Then there was a flash like lightning, and a fragrant odour, and Abba Sisoes departed to the Heavenly Kingdom.

St. Sisoes is today well known for his depiction in an icon which became popular upon its appearance in Greek monasteries following the fall of the Byzantine Empire in 15th Century. This icon, the “Astonishment of Sisoes”, is a contemplation on death, but not only the death of a man, but of an earthly empire. The icon shows St. Sisoes over the dead bones in Alexander the Great’s open tomb and with the following inscription:

“SISOES, THE GREAT ASCETIC, BEFORE THE TOMB, OF ALEXANDER, KING OF THE GREEKS, WHO WAS ONCE COVERED IN GLORY. ASTONISHED, HE MOURNS FOR THE VICISSITUDES OF TIME AND THE TRANSCIENCE OF GLORY, AND TEARFULLY DECLAIMS THUS:

‘THE MERE SIGHT OF YOU TOMB, DISMAYS ME AND CAUSES MY HEART TO SHED TEARS, AS I CONTEMPLATE THE DEBT WE, ALL MEN, OWE. HOW CAN I POSSIBLY STAND IT? OH, DEATH! WHO CAN EVADE YOU?’”

The Theophany Sanctification Prayer of St. Sophronios of Jerusalem

If a person entrusts himself to God, then God will not abandon him. Elder Paisios the Athonite