Demoniacs then and now 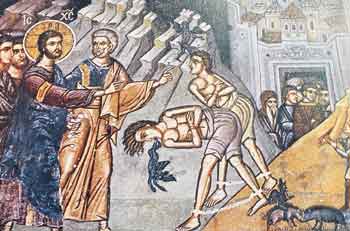 My beloved, you heard the sacred and holy gospel. A small book the Gospel, but it is the most beautiful, most powerful, most superb, incomparable book of the world. Happy, then, is the one who not only reads it, but also tries to enforce it to a “T”;  “blessed are those who hear the word of God and keep it” (Luke 11:28).

The gospel today narrates one of the many miracles which our Lord Jesus Christ performed. This miracle is of interest to all, but particularly to young people. For, there were two youngsters that Christ cured here.

Where did they live? In the city of the Gadarenes, at the Western shore of the lake of Gennesaret. They were peaceful people, the joy of the city. But suddenly what happened to them? Did they fall ill? Would that they had fallen ill. For, there is something worse than even the most fearful illness, even cancer, too. A crisis took hold of them with fearful symptoms and seen for the first time. They began to tremble like the leaves. Their face grew wild, there eyes emitted flames, their mouth foamed. They fell down and rolled around; at one moment they fell into fire and in another instance into water. They tore their clothes, they stripped nude completely. They left from their homes, went far abroad, into the tombs, and there they slept. They had become the fear and terror of the whole region; no man dared to pass. At some point they would catch them and bound them with chains; but, well, they had such strength inside them, that they broke the chains like threads and frenzily ran into the deserts. What were they? One word: “Demoniacs” (Matt. 8:28).

Someone will say: Fairy tales; the devil, demons, and demoniacs don’t exist.

I too, my beloved, would like for the devil not to exist. Yet, he exists. He isn’t a phantasm, a ghost; he’s a reality, a being, and an entity. That the devil exists is proved by many crimes, which are not explained any other manner. Great psychologists, in regard to people who committed great crimes, find one explanation; that they remain under the influence of an invisible evil-dealing power. In the tongue of Scripture these are called “demoniacs.” That there exists the devil and demons Christ verifies it still more, Who came into the world “in order to loose the works of the devil” (1 John 3:8). Finally, if someone continues to doubt that the devil exists, let him go to St. Gerasimos of Cephalonia. There the demoniacs gather; but when the priest appears with the cross that the saint held, they shout trembling: “You burned us, “Kapsali” (“Burner”, “Kapsali” is what they call saint Gerasimos). There exists then the devil. But there’s no need for us to go to Cephalonia to see it (i.e., the fact that he exists). Throw a glance into your heart, particularly the youth, and you will see there the influence of Satan. You’ll see similarities, the same symptoms with the youth of the gospel. I remind you of some.

The Russian author Dostoyevsky wrote the work “The Possessed”, in which he describes men of his epoch. But if he lived today, he would write “The Contemporary Possessed”, who are infinitely worse.

No, I’m not pushing you to despair. Glory to God, near Christ there is no despair; there is redemption and salvation – there is the conqueror of demons. Our Lord Jesus Christ, those whom they were not able to keep them the house and they lived in the tombs, these were the terrorists of society and whom they bound with chains. Today he made them peaceful like little lambs. Consequently, hope exists. And today’s youth, even insomuch that their heart has another orientation, they can, if they want, find the straight path. “All,” then, “who are faithful believers”, then. And even if one in a hundred is saved, it will be a great good boon.

Approach Him then. But not with lies, not with half a heart. Give Him your whole heart. I weep on account of those who give their whole heart not to Christ but to some other imperfect human being. A maiden came and said to me: – I met someone and I considered him an angel. My mother and father would say to me; you’ll be miserable near him. I didn’t hear anyone. He then left me five months pregnant, took a plane and left to Australia… Now the girl shouts and cries, and she wants to commit suicide.

Therefore, take a great deal of care, so you don’t cry a lot. Don’t give your heart up to exploiters and to demons. Your entire heart, my children, give to Christ, give to God. “Thou shalt love the Lord your God from all your heart” (Deut. 6:5; Mark 12:30). Under the sun and the stars there is no other more love-worthy bridegroom of our souls that Christ. Whom children praise and exalt unto the ages. Amen.

On the Love of Enemies

The following was a letter to the Roman Emperor Hadrian (d.138AD) from the Athenian Orator Aristides in which he depicts how the Early Christians lived.

Should or shouldn’t reveal my thoughts to another?