GOD NEVER LEAVES From “The Evergetinos. ” 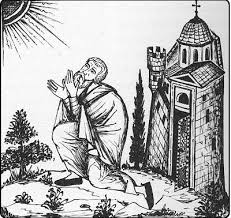 A  brother was beset by the demon of lust. It so happened that the brother once passed by a village in Egypt and saw a beautiful woman, who was the daughter of a pagan priest. On seeing her, he was wildly aroused and, under the influence of his passions, went to the father of the girl and said: “Give me your daughter as my wife.”

“I cannot give her to you,” the pagan priest answered, “without asking my god. Wait a bit.”

Indeed, the pagan priest went to his god’s oracle (through which, as we know, the Devil speaks) and asked: “A monk came to my home and wants my daughter as his wife. Shall I give her to him?”

The demon hidden in the oracle answered him: “Ask him if he will deny his God, his baptism, and the vows he made as a monk.”

When the pagan priest returned, he said to the monk: “Will you deny your God, your baptism, and your monastic vocation?” Indeed, the monk accepted his terms. But immediately he saw something bright come from his mouth and, like a dove, go up into the heavens.

Right away, the pagan priest ran to the demon and said: “Behold, the monk did all that you asked.” Then the demon said to him: “Do not give you daughter to him as a wife, for his God has not departed from him, but is still helping him.”

So once again, the pagan priest went to the monk and told him: “I cannot give my daughter to you as a wife, since your God continues to remain near you and help you.”

On hearing this response, the monk was deeply moved and said within himself: “Even though God in His singular goodness has bestowed upon me so many good things, I—wretch that I am—have denied Him, His Holy baptism, and monastic vows.

But despite my denial, God has not departed from me, though I have so greatly betrayed him, and continues to help me. After that, do I not have duty to run to Him, grounded in the surety of His boundless goodness?”

Having now recovered from the dizziness of passion, the brother left immediately for the desert and went to his Elder, to whom he confessed his denial, as well as all of his thoughts.

With kindness the Elder told him: “Brother, remain with me in my cave and fast for two days at a time for three weeks: that is you can fast strenuously for two days and on the third relax the fast. And I will ask God to forgive you.”

The Elder did indeed grieve for the brother and entreated God with earnestness: “My God,” he would say, “Give me the soul of this monk and receive his repentance.”

God, as merciful as he is, heard the sincere and fervent prayer of the Elder, especially since it came forth from genuine love. When the first week of the cloistered monk’s penance had been fulfilled, the Elder visited him and told him: Have you perhaps beheld something?”

“Yes,” the monk answered, “I saw a dove depart for the heavens in front of my head.”

The Elder said to the repentant monk, “Take care for yourself and ask God with the whole of your soul, without cessation, to forgive you.” With these recommendations, the Elder once again departed.

As soon as the second week had passed, the Elder came again to the cave where the monk was cloistered: “How is it going, Brother? Perhaps you have seen something again?” he asked with fatherly concern and care.

The Elder, having advised him anew to pray with earnestness and to stay in a state of vigilance in his soul, took leave. When at last the third week had elapsed, the Elder we to the cloistered monk and said to him: “Have you seen anything more:

With joy, the monk answered: “I saw the dove come and perch on my head. So, when I stretched out my hand with joy to grab him, he flew into my mouth.”

When the Elder heard this answer, he thanked God and said to the repentant monk: “Do you see, my brother? God has accepted your repentance. Therefore, be careful with yourself from now on.”

Crying, the emotion-filled brother answered the Elder: “From now on and ever after, Father, I will remain near you, and shall not leave you until I die.” And indeed the monk remained with the Elder and never left.

The role of the Orthodox Church 1