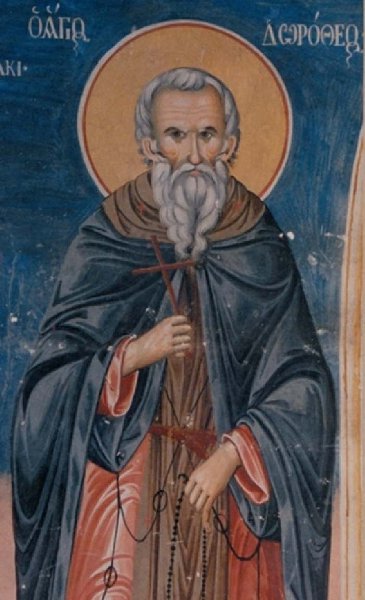 Perfect obedience is this:

( St. Dorotheos ) never allowed ( his disciple, Dositheos ) to become attached to any material objects. Dositheos took everything with joy and faith and obeyed willingly in everything. When he needed a cloack, Dorotheos provided him with the cloth and he would go away and sow it carefully with style. When he had finished, he would ask, “Dositheos, did you sow that cloak?”

Dositheos would reply in simplicity , “Yes, Father, I made it most beautifully and well.”

He would then say to him, “Go and give it to that brother or to that sick man.”

He would go and give it away willingly. Dorotheos provided him with more material again and likewise, after he had sewn it and finished it with great care and style, he would say to him, “Give it to that brother” and he would immediately give it away without feeling distressed and without grumbling, or saying, “Why should he take it away from me and give it to someone else, after all, I was the person who took the trouble to sew it and finish it stylishly and carefully?” Rather, he would willingly do good whenever there was good to be done.

God wanted to reveal the glory which was prepared for [Dositheos after death] because of his holy obedience and also the gift which blessed Dorotheos had, for saving souls, even while still a disciple. Dorotheos guided Dositheos so unwaveringly and quickly to God. Therefore, shortly after the blessed end of Dositheos, a saintly man, a great elder, desired to see all the saints of the community who had passed away and asked God to grant him this wish. He then saw all of them standing together as a choir and amongst them was a certain younger monk. He said, “I wonder who this young man I saw amongst the fathers is?” When he described his facial features, everybody realized that it was Dositheos. So they glorified God, marvelling at the fact that Dositheos had become worthy of reaching such a great height in such a short time, despite his earlier life and discipline, simply through obedience and denying his own will.

(Excerpts from Abba Dorotheos: Practical Teachings on the Christian Life, p. 60 and p. 63).

This book is highly recommend. The English translation is superb and it comes with an audio CD of the text.

“Vouchsafe us, O Lord, to live this day without sin.”Elder Sophrony(Sakharov) of Essex

The image of the Trinitarian God