LET US LAY ASIDE ALL EARTHLY CARE From “Life of St. Papa-Nicholas Planas. ” 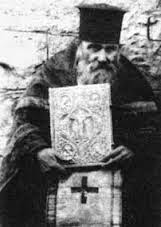 LET US LAY ASIDE ALL EARTHLY CARE
From “Life of St. Papa-Nicholas Planas. ”
One day, after the Liturgy, we took a carriage and went somewhere together with Father (Fr. Nicholas Planas, Ed.). In the carriage he said to us:
“Today Chrysoula was also in church.”
“No, my Father,” we said to him, “she wasn’t.”
“Why, what are you saying? I censed her.” He responded.
“No,” we repeated, “she wasn’t there.”
“Oh, well,” he said without any concern, and then with conviction, “it was her spirit.”
We wondered at what he told us, because the same thing had occurred at a certain monastery, where the priest censed the stall of an absent deacon and would not cense a monk who was in his stall.The monk wondered about this and complained to the priest; how did he omit to cense him, even though he passed in front of him, and yet censed the empty stall? And thus the priest was given an opportunity to hear the confessions of both, that is, what thoughts they had during the Liturgy.
The monk confessed that his mind ran towards thoughts which were sinful and far removed from his sacred calling. Whereas the poor deacon, even though he had undertaken a duty outside of the church, kept his mind present in church.
For this reason we also asked the sister (Chrysoula, to whom Fr. Nicholas had referred to, Ed.) what she had been thinking of during the previous day, and she said (with great simplicity, for she was illiterate) that her mind and soul had been present at the Divine Liturgy. Her hands were weaving, but her mind was wholly in church. This was why Father Nicholas saw her, and censed her, and without hesitation said that it was her spirit.
Let us also take care when we are in church. Is our spirit also present along with us? The Church cries out with her compunctionate hymn: Let us lay aside all earthly care, etc. Do we hear, or does each one of us bring many thoughts unsuitable for the place in which we are present? It is a sad thing that we cannot become masters of the spirit, to control it, to command it to think upon the Heavenly Mystery: the descent of the Lord during the solemn hour of the Liturgy, etc. Whereas we see a simple soul who, even though in reality she was doing other pressing and earthly chores, noetically was found present in church.
Orthodox Heritage
http://apantaortodoxias.blogspot.gr/2014/09/let-us-lay-aside-all-earthly-care-from.html
IN ENGLISH, ST. PAPA-NICHOLAS PLANAS, ΑΓΓΛΙΚΑ In English, ST. PAPA-NICHOLAS PLANAS, ΑΓΓΛΙΚΑ

THE BREATH OF LIFE: THE HOLY SPIRIT

when you are in a state of peace, all is well. Elder Thaddeus of Vitovnica