MIRACLES PERFORMED BY SAINT LUKE THE PHYSICIAN OF THE CRIMEA 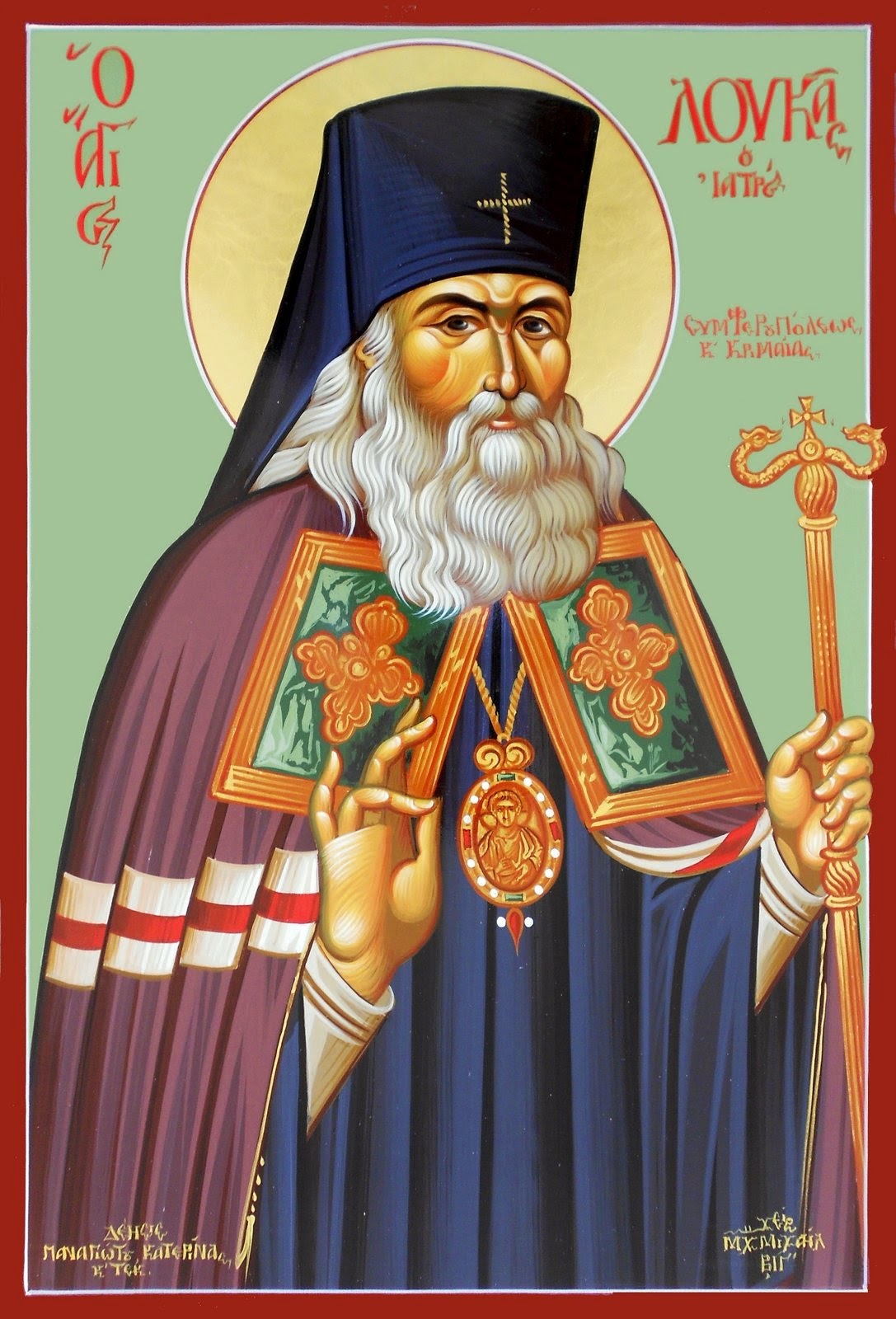 On the 28th of May, 2014, during the construction of the Church of Saint Luke the Physician, at the Monastery of the Holy Mother in Dovra, Veria, Greece, a festal Hierarchical Vesper was being celebrated.  The purpose of the Vesper was to honor the arrival of the relics of St. Luke the Physician from Simferopol, Crimea, Russia.  Bishop Theodoritos of Nazianzus was the celebrant and the homilist.  The following day a Hierarchical Divine Liturgy was celebrated by Metropolitan Panteleimon of Veria, Greece.  Bishops Theoridoritos and Dimitrius and many priests were concelebrants at the Divine Liturgy.  They had all come together in order to honor the Saint and to receive the blessing of the Saint.   Shortly before the end of the service, Archimandrite Sosipratos Pitoulias was asked by the Metropolitan of Veria to speak to the congregation about the recent miracle that was performed by Saint Luke for his nephew.
Father Sosipatros, who was visibly emotional, began to tell the faithful about the miracle that was performed by the Saint.  Fr. Sosipatros said the following:“The child Elias was a few months old when he was diagnosed with leukemia.  I and Fr. Gregory Maza took turns at the hospital keeping vigil for the child.  On the eve of the falling asleep of Saint Luke the Physician, June 10, Father Gregory, late one night left the hospital in order for him to get some rest. He left me at the hospital to watch over the child.  A short time after he left the hospital, he phoned me and was very emotional.  Although he was emotional his voice was also very joyous.  He said to me: “Father Sosipatros Saint Luke has once again performed a miracle!”  My response was: “What happened?”  He said: “When I left the hospital, I took a cab to my home.  A short time before arriving at my house, the unknown cab driver asked me:: “Is everything all right?” “Father Gregory was perplexed by this and answered:” “Everything is just fine.”  “The cab driver asked the same question once again:” “Father, is everything all right?” Father Gregory not wanting to continue the conversation with the unknown cab driver answered curtly:” “Everything is all right.”  “And then the cab driver said to him:” “Father Gregory, that child that you are taking care of, which is not yours, will recover!”   “Father Gregory became confused at hearing this and then directing himself to the unknown cabby asked him:” “How do you know about the child? How do you know about me? How do you know about all these things?  And the cab driver answered him: “  “Do not ask me many questions Father, the child that you are taking care of, and which is not yours will get well.”  “They had reached their destination and the taxi stopped. Father Gregory, in shock, paid the taxi fare to the unknown driver who knew everything about him.  The taxi driver took the money and gave Father Gregory change and then just disappeared.  I do not know if that taxi driver was Saint Luke or the Saint was speaking through him.  That which I know is that little Elias has been healed!”
The response of the congregation on hearing this miraculous story from Father Sosipatros left them in shock. Little Elias, who was in the Church being held by his uncle, is the recipient of one more miracle performed by Saint Luke.
St. Luke the Physician and St. Panteleimon
Perform an astounding Miracle in a hospital
OPERATING ROOM

IN ENGLISH, MIRACLES, ΑΓΓΛΙΚΑ In English, MIRACLES, ST. LUKE THE DOCTOR AND ARCHBISHOP OF CRIMEA, ΑΓΓΛΙΚΑ

A savior on a daily basis Saint – John of Kronstadt

So, do you want me to tell you how we, who are illiterate, read the Scriptures?

The church – a “funeral home”