On August 16, we commemorate for the first time the feast day of St. Joseph the Hesychast. 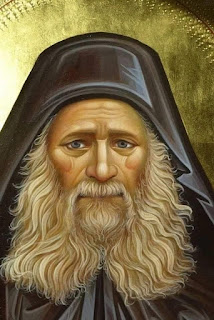 On August 16, we commemorate for the first time the feast day of St. Joseph the Hesychast.
☦ Saint Joseph has appeared even to people who did not know about him. Metropolitan Athanasios of Lemesos in Cyprus told the following about a woman in America:
Sphe was a good person, but she had been misled by Jehovah’s Witnesses and began to associate with them and accepted their heretical views. One night Elder Joseph appeared to her and started teaching her that what she was doing would destroy her soul. He then took her by the hand and said, “Come, I will take you to venerate Christ, and you will see that the Jehovah’s Witnesses are wrong.” He then took her before Christ, and then Christ Himself told her that our Church has the truth.
☦ Deliverance from Thoughts (Miracles of Saint Joseph the Hesychast)
“Many other people received miraculous help from Elder Joseph. Father Prokopios, a disciple of harsh Papa-Nikiphoros, once was strongly tempted to abandon his elder. So Papa-Ephraim (who was also a disciple of Papa-Nikiphoros) advised him: “Go over to Elder Joseph, do a prostration at his grave, and you will feel relief from your thoughts.”
Father Prokopios did as he said, and he later described what had happened as follows:
When I set off from Katounakia, a fragrance enveloped me. When I reached Geronda’s grave, I did a prostration. I told him my thought, prayed, and then returned to Katounakia. On my way back, the same fragrance surrounded me. When I entered my cell that fragrance was gone, but the temptation also disappeared. I was at complete peace and the thoughts about leaving were gone.
☦ Interceding for Us
When I was abroad in 1987 I saw Geronda again in my sleep after finishing my vigil. He looked very happy and much younger than he was when he passed away. He said to me: “My child, know that when you are obedient, you help make my petitions and intercessions more accepted by God because I am praying for people who are forceful in their spiritual struggle.”
“Yes, Geronda, we are trying to be obedient, and I try to do everything you told me. I have held on to everything you taught me, and. now I live—in a simple way—as you used to live.”
He was delighted to hear that, and when I woke up I was thoroughly renewed. It is very comforting to know that people like my elder and Gero-Arsenios are helping us work out our salvation. I believe that now that Geronda is up in the other world, he is concerned for us that we not lose our salvation and all those good things he is enjoying. He must be thinking: ‘Just as we had to face spiritual dangers, they too are facing dangers, and they need help now.’
He can already foresee what will be given after the Second Coming to those who have conquered sin, the passions, and the demons. He realizes what will be revealed after the Second Coming when Christ, the Lamb Who was sacrificed, will be in Paradise together with the entire brotherhood of victors (the saints). Paradise will open for them with resurrectional joy. When they enter, He will tell them: Behold, Paradise. Behold, God’s gift to you.”
Geronda is fully aware of all this, and he is worried that some of us might lose our souls and not see all those things and be deprived of these great blessings and riches from God. He is worried that, instead, we might go down to fearsome, eternal hell to live with the demons. Being aware of this, he is anxious and is praying and entreating God that no one will fall away and lose his soul.
Source: Elder Efraim (of Arizona), My Elder: Joseph the Hesychast and Cave-dweller, Saint Anthony’s Greek Orthodox Monastery, 2013, Arizona USA
May Saint Joseph the Hesychast intercede for us all and bless us!! Amen!!
https://apantaortodoxias.blogspot.com/2020/08/on-august-16-we
IN ENGLISH In English, THE ELDER JOSEPH TH HESYCHAST

Searching for the Truth

Why do people divorce?

The surest form of friendship (Saint Paisios the Athonite)