Saint Kosmas the Aetolian as a Missionary Part 2 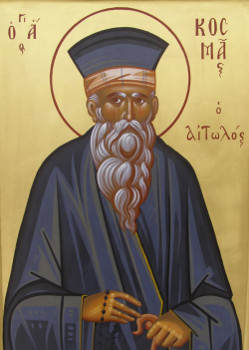 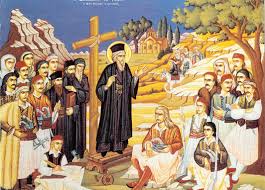 Saint Kosmas’ great influence cannot be entirely explained without taking into account another important element which contributed significantly to the tremendous progress he made in his missionary work. This element is exactly that which is noted at the end of Saint Mark’s gospel: “And they [the Apostles] went forth and preached everywhere, the Lord working with them, and confirming the word with signs following. Amen” And signs followed the Saint’s teaching for he has not only the gift of speech, but also the gift of working miracles and prophesying concerning the future. 6. Conclusion. Beloved! What a missionary – a missionary “equal to the Apostles” as the hymnographer who wrote his service writes – Saint Kosmas was shown to be. Honouring his holy memory, let us give thanks to the Lord for this new luminary of the Orthodox Church, and let us also ascribe honour to those people who cooperated in Divine Providence, in the development of this great missionary figure of the later times. Let us first ascribe honour to his devout parents, who from his infancy nourished him with the pure milk of Orthodoxy, then to his teachers, to the wise Evgenios of Bulgaria, to his spiritual fathers and brethren on Mount Athos amongst whom he trained to become a true struggler for the faith. Finally, let us ascribe honour to the Patriarchs Seraphim and Sophronios of blessed memory, who encouraged him in his missionary work and furnished him with letters commending him to all the bishops of the Ecumenical Patriarchate. This last aid was inestimable since without the permission and commendation of the Patriarchate, Kosmas would not have been able to circulate freely in Turkish-occupied Greece. This immediately brings the thought to mind: if Kosmas lived in our day, would he have received such support from the hierarchy of the contemporary Church? It is our fear that this apostolic man, who did not sugar-coat the weaknesses of those in ecclesiastical authority, but rather checked vice wherever he saw it (even if it was in Episcopal or Patriarchal courts), would not have been granted permission to preach. He would have been sentenced to return to the monastery of his repentance as a troublemaker and a threat. Any who would cast a glance at the life of the contemporary Church would sigh bitterly at the lack of missionary figures like Saint Kosmas the Aetolian. If he tries to find the reason for this lack, he will find a multitude of causes; one of these, in my own view, is that the missionary inclinations of pure servants of the Gospel do not only receive no support in our day, but are condemned. They are condemned first and foremost by those who ought to be supporting them. This is a sorrowful observation. +Metropolitan Augustinos (Kantiotes) of Florina Translated  by  Fr. John Palmer  http://www.orthodoxpath.org/saints-and-elders-lives/saint-kosmas-aetolian-missionary-part-2/

THE VOICE OF ORTHODOXY: METROPOLITAN SERAPHIM OF PIRAEUS

Saint Jerome had a vision in a cave in Bethlehem