THE APPEARANCE OF SAINT PARASKEVI TO NUN CHRISTONYMPHI 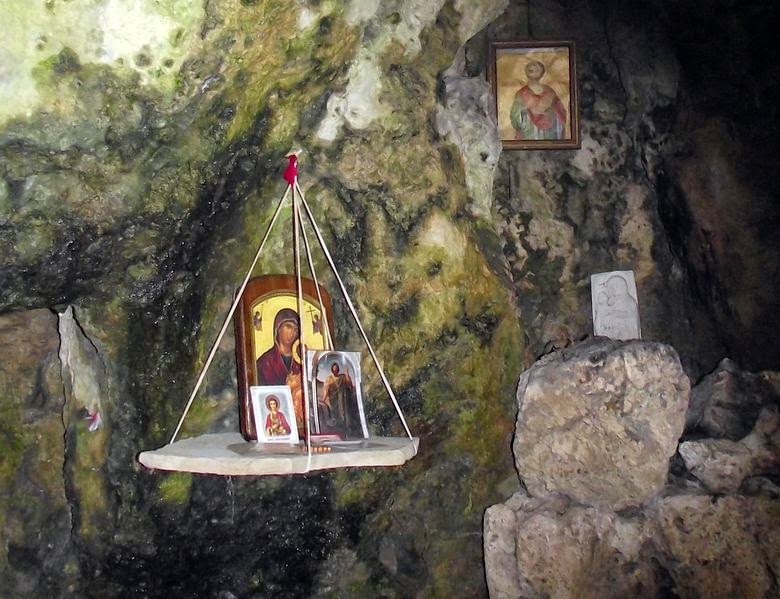 THE APPEARANCE OF SAINT PARASKEVI TO NUN
CHRISTONYMPHI
During the time of the civil war in Greece 1946-1950 between the communists and the government of Greece the communist guerrillas would often come down from the mountains, hide in the bush near the Monastery of St. Paraskevi looking for food.  The cell of nun Christonymphi was located on the ground floor of the Monastery.  Nearby there were four or five other cells of other nuns.  There was also a dining room and a large room whose walls were filled with icons.  This room was being used as a Church by the nuns.  The sisterhood of nuns would gather in this room at midnight to read the monastic midnight service.  After the service the nuns would rest for a while and then wake up early in the morning to chant the matins service.  Nun Christonymphi usually would go to the Church which was some distance from the monastic cells and light the kandylia (votive lights). She would do this before the start of the midnight service.  At one point the Monastery ran out of olive oil because the nuns did not have any olive trees.  For nun Christonymphi, it seemed unnatural not to have the kandylia lit.  The nun went to the local bishop and requested permission to go to the Island of Thasos in order to get a supply of olive oil.  It did not take her very long and she soon returned with a lot of fresh olive oil that was donated by the faithful of the island.
In spite of the availability of the olive oil at the Monastery, the Abbess directed the nun not to light the kandylia at night for fear of the communist guerrillas who were nearby.  We should be aware that absolute obedience to the abbot or abbess of a Monastery is a cardinal rule of monastic life. The nun did not fear the guerrillas because she felt that she had the protection of Saint Paraskevi.  But in obedience to the directives of the Abbess, she sadly did not light the kandylia.  One night she woke up early to begin reciting her usual prayer canon.   She prayed: “Oh wouldn’t it be nice for me to light the kandylia in the Church. Please forgive me Holy Saint; I do not have permission from the Abbess to do this.” While she was thinking about this, she heard a knock on the door and a voice saying: “through the intercessions of our holy fathers.” Who could it be at this hour?  The voice responded: “Open up Sister, I am Sister Synglitiki.” She opened the door and asked her: “What is wrong Sister that you are out at this hour of the night?”  The response was: “Sister Christonymphi why are not the kandylia lit in the Church?” “Excuse me, dear Sister; I do not have the blessing from the Abbess to light them.”  The response was: “No, that is wrong.  You must go and light the kandylia.” After saying this, the other nun left.
Nun Christonymphi agreed with the request of the other nun but obedience is a cardinal rule in a Monastery.  The nun lost no time after this encounter she had and in the morning she went directly to the Abbess and said: “Sister Synglitiki told me last night to light the kandylia but I told her that without your blessing I cannot light them.”  The Abbess got upset when she heard this and she immediately called Sister Synglitiki and said to her: “What right do you have disobeying my orders?”  Sister Synglitiki was startled at hearing this and said: “Your blessings Abbess, are you serious about what you are saying?  I never even visited the cell of Sister Christonymphi last night.  I have no knowledge about what you are saying. I would never tell Sister Christonymphi to light the kandylia without your blessing.”
The Abbess at this point realized that the visit was not made by Sister Syngklitiki.  It was Saint Paraskevi who spoke with Christonymphi.  The Abbess said to Chrystonymphi: “Since Saint Paraskevi protects you my child, who am I to hinder you from lighting the kandylia?  You have my permission to light them every day.”  Imagine the joy that Sister Chrystonymphi had when she heard these words.   Her joy was not only because she now had permission to light the kandylia but she was made worthy to see with her own eyes and speak to Saint Paraskevi.  From that moment on throughout the duration of the civil war she lit the kandylia without fail and she never saw any of the communist guerrillas threaten the Monastery.
A postscript to this miraculous event is that all Orthodox Christian homes should have an eternal light lit (kandyli) before the icons in their homes.
Translated from the Greek by:
+Fr. Constantine (Charles) J. Simones, Waterford, CT. USA, July 14, 2014, cjsimones300@gmail.com
http://apantaortodoxias.blogspot.gr/2014/07/the-appearance-of-saint-paraskevi-to.html