The Art Of Salvation – Elder Ephraim of Arizona 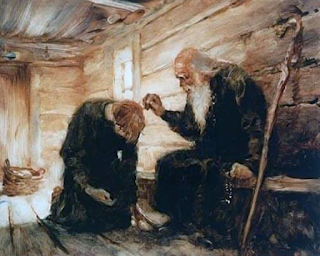 At a certain monastery, there was a monk whom the devil had successfully led into negligence. He stopped doing his prayer rule, ceased attending church, and discontinued his appointed prayers.

The other fathers were aware of his negligent conduct. Eventually, the time of death approached, and the other fathers gathered by his side hoping to see a sign that God would, perhaps, show for their benefit. The fathers noticed that this careless monk was exceedingly joyous as death drew near. They were puzzled. “How can he be so peaceful?” they wondered.
“He spent his entire monastic life with complete indifference. Doesn’t this worry him? Isn’t his conscience protesting? Doesn’t he feel uneasy? Why isn’t he despairing?” Meanwhile, the monk continued to be joyful. Compelled by curiosity, they asked him, “Forgive us, dear brother. We notice that you are quite cheerful. We all know, however, that you were negligent and indifferent when it came to your monastic duties. Now that you are departing to be judged by Christ, we expected you to be somewhat concerned and apprehensive. However, we see the exact opposite: you are joyous, peaceful, and full of hope. We are truly perplexed. How do you justify this?”
The monk replied, “You are correct, dear fathers. This is how it is. I was negligent, and I did not struggle as much as you. However, I upheld one virtue throughout my life: I did not judge any of my brothers. I had read in the Holy Gospel that our Lord states whoever does not judge will not be judged. So, I tried at least not to judge. Thus, I have faith in God’s compassion that He will not judge me. This is why I am departing with the hope that God will keep His promise.”
The fathers looked at each other in amazement and concluded that, indeed, their brother attained salvation very cleverly and easily. If we remain watchful, we will avoid criticizing others. As soon as the sin of criticism appears, watchfulness should prevent the thought of criticism from progressing, just as Abba Paphnutios did. As a result, we will avoid the sin of judging and criticizing with our tongue, and our name will be written in the book of eternal life. When one manages to keep both his internal and external tongue clean, in order to fulfill the commandment of God, this is proof that he has found salvation.
The Art Of Salvation
Elder Ephraim of Arizona
https://apantaortodoxias.blogspot.com/2019/03/at-certain-monastery-there-was-monk.html
ELDER EPHRAIM OF PHILOTHEOU, IN ENGLISH ELDER EPHRAIM OF PHILOTHEOU, In English, SPIRITUAL WORDS, THE ART OF SALVATION

Elder Charalambos of Dionysiou: Wonder and weep in the presence of God