THE FOLLOWING IS ANOTHER PERSPECTIVE ON THE UNCREATED ENERGIES OF GOD 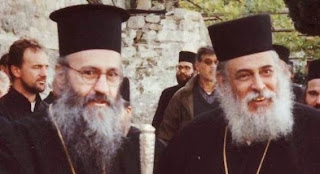 In spite of all the theological turmoil that took place during the fourteenth century in Constantinople over this controversy of the Uncreated Energies of God as experienced and taught by St. Gregory Palamas of Thessaloniki, there are contemporary Saints of Holy Orthodoxy who have experienced the Uncreated Energies of God.  Let me quote for you an experience of a recently canonized Saint of the Orthodox Church, Saint Porphyrios.  Monk Akakios, the caretaker of Saint Porphyrios, as Porphyrios was preparing to leave this earthly life, tells us his eyewitness account of the Uncreated Light of God.  “He experienced this Uncreated Light in his cell at the Monastery in Malakasa, Greece which is about one hour outside of Athens.  That particular day, he was talking to Akakios, his caretaker, about spiritual issues.  He was able at that time to still get up from his bed and walk a few steps.  He got up and walked a few steps toward me and suddenly I saw him levitating above the floor.  At the same time he started to exude a very bright blue light—his clothing, his face, and everything about him was reflecting this bright blue Light.  I tried to look at his face but my eyes could not stand the brightness of that Light.  I turned away for a while and then I looked at him again.  I could not get enough of that Light that was shining from him.  Again I could not stand the brightness and I turned away.  I do not remember how long this phenomenon lasted.  But slowly, slowly the brightness started to diminish and he was gently lowered to the floor.”

The pains of Love…Saint Isaac the Syrian

Why is it necessary for an already baptized person to be purified again?