THE IMPIETY OF PEOPLE HAS REACHED THE HIGH POINT- By the Holy Elder Philotheos of Paros. 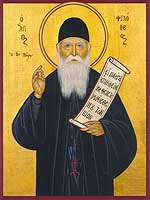 THE IMPIETY OF PEOPLE HAS REACHED THE HIGH POINT
By the Holy Elder Philotheos of Paros, written to a General in 1955- [this timeless piece of factual observations and advice remains even more accurate and vital in our days, some 60 years after its authorship]
The impiety, corruption, senselessness and lack of conscience of people, both lay- people and clergymen, men and women, rich and poor, generals and soldiers, the rulers and the ruled over has reached a high point and is speedily progressing in leaps and bounds till it reaches the greatest precipice.
What is countering this pitiful progression of spiritual impiety? It is: the infinite compassion of God;His immeasurable mercy and unimaginable long-suffering; the intercessions of His all immaculate Mother and of all the Saints; the little virtue, faith, hope and love of the few people; their prayers and petitions to the Lord for the salvation of the whole world; the lack of evil in the babes and infants (although even the majority of the babies from their birth receive from their evil and corrupted parents as an inheritance and partake of the wickedness, the evil and bad habits of their birth-givers). All the above things restrain the most just wrath and the most righteous anger of the merciful and infinitely compassionate God.
But until when? Until the cup is filled, which as it seems, has been filled and has begun to pour out not completely, but little by little. This slow change in God’s wrath is again allowed for our benefit. What benefit, you ask? So that we can understand how harsh it is to sin and not repent, and so that fearing we might cease sinning and enraging God, who is our most loving-caring Father, the Provider, the Ruler, the Protector and Granter of all good things.
Unfortunately nothing, nothing at all scares or intimidates us; we have become worse than the irrational beasts because they know their protector and master. Man, however, not only does not know Him, but even blasphemes against Him. When animals happen to pass by a slippery place and slip or fall, they remember the fall and they won’t pass by that area again, they might even prefer that someone kill them rather than that they pass by that place.
Man, on the other hand, who is more senseless/foolish than the animals, when he happens to fall in a certain area and becomes wounded, wounded in soul, he does not think of the fall, the harm, but he runs there with pleasure. Have mercy, have mercy O Lord upon such minds. But even if a father, mother, brother, spiritual father, teacher or priest or spiritual guide is found who advises him, he continues to propel himself to the avenues of fallen and sinful behaviors.
Be careful, guard yourself, depart, don’t go to that place, to that person, do not do that sin, it is dangerous, it is a double death of body and soul, it is hell! Most people will not only not accept such counsel, but they even get mad, angry, and are hostile towards the doctor. For these reasons, the people of today’s generation, aside from the other sins which they have, also have pride, and being prideful they neither receive counsel, nor correction nor repentance. The teacher, if he is a priest and spiritual father, must be careful to invent medicines and appropriate ways, to correct them. Neither should he be silent, nor should he censure them harshly and abruptly, because strict censures are bruises to prideful and impious ones, and if he abruptly censures them, he will lose them completely.
The teacher must become wise and very discerning, and because no one is wise in this world of himself, he must through fervent prayer ask God, the granter of true wisdom, to give him the gift of wisdom and prudence, like Solomon, to govern souls. Many times with the same medicine one person is healed and the other is harmed—the teacher and the priest must have the gift of discernment. Nevertheless a good, sweet, mild, humble manner benefits the fallen man more…
To the scorners, the hostile, the impious, the lewd and rude people, he should not give the holy things. And, most importantnly, to the heretics after the first and second counsel, let him give up! Amen.
http://apantaortodoxias.blogspot.gr/2014/07/the-impiety-of-people-has-reached-high.html

†Prayer of †Saint Ephraim the Syrian†

To joy, from dejection (Saint Porphyrios of Kavsokalyvia)

Silence should be kept secretly and in your heart

Abba Sisoes at the tomb of Alexander the Great