The Uncreated Energy (logoi) of God in Nature 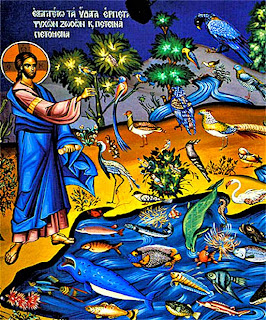 The Church has two fundamental doctrines with regard to the creation. The first is that God created the universe out of non-being and not from allegedly pre-existing ideas. The second is that God governs, maintains and provides for the creation through His uncreated energy and not by means of created laws.
The energy of God is single, but it is differentiated into many energies according to its results, namely: existence-bestowing, life-giving, wisdom-imparting or glorifying, just as there is the creative, sustaining, providential and glorifying energy of God. The entire creation participates to varying extents in God’s energy. At this point, when mentioning the energy of God in creation, we shall refer to the creative energy of God but not to His glorifying energy, in which the angels and saints share, as we shall see later.
“All things participate in the creative energy of God, but not in His glorifying energy.”
Only the angels and saints participate in the glorifying energy of God. The creative and sustaining energy of God exists in creation.
“Creative means that it brings into existence, sustaining means that it maintains: in other words, maintenance. Like the plumber who comes to your house and maintains the pipes.”
In the universe there are no so-called natural laws, which God is alleged to have put into creation before abandoning it. Instead there are natural inner principles (logoi), which are the uncreated energy of God. Christ referred to this when He said of the birds of the air that “the heavenly Father feeds them”, when He said of the lilies of the field that the heavenly Father arrays them, and of man, that God is personally interested in him (Matt. 6:26-33). Other words of Christ that refer to this issue are: “My Father has been working until now, and I have been working” (John 5:17). The introductory psalm at Vespers (103 LXX) also contains many phrases that show God’s personal intervention in the world: “You are He who sends springs into the valley”, “You are He who waters the mountains from His higher places”, “You are He who causes grass to grow for the cattle…” and so on.
“The energy of God is everywhere. It is everywhere present and pervades the universe.”
Many Fathers, particularly St Maximos the Confessor, when they refer to the sustaining, maintaining energy of God that is present in the whole of creation, mention the inner principles (logoi) of things. These ‘inner principles of beings’ are not the archetypes of the ideas, as the ancient philosophers asserted, but the creative and sustaining energy of God.
“There is a difference between the Fathers and Augustine on the following point: because Augustine identified the glory of God with Plato’s archetypes and Plato’s forms, illumination for Augustine was not the unceasing remembrance of God in the heart, but the vision of the archetypes in the essence of God, when someone conceives the archetypes or forms with his brain.
We need to be careful here because sometimes the archetypes are used by the Fathers, but for the Fathers the archetypes are formless: they are not the Platonic forms, whereas for Augustine they are the forms that are identical to the archetypes. Here we have the forms. We have the rationes – that is to say, the rationes that are the inner principles (logoi). The inner principles (logoi) are called rationes in Latin. Augustine occasionally refers to the rationes.
This would be fine if he went no further. This is the teaching of the faith, because we ought to know the inner principles (logoi) of things. However, for us these inner principles are not archetypal forms. They are not forms but divine purposes, destinies and so on; they are what God wills. For Plato they are not divine purposes. For Plato they are the originals of which the world is a copy. That is to say, there is a form of man and we are a copy of the idea of man. Yes, but man is not a copy of the inner principles (logoi) of beings, because the principles of beings are free from form and have no shape. The principles of beings have no similarity at all with created things in patristic literature.”
It is significant that the teaching of the Fathers on the inner principles (logoi) of beings is not speculative or rationalistic but empirical, because they had at some time, through the illuminating and glorifying energy of God, reached the point of seeing the sustaining and providential energy of God in creation, a vision that is called natural theoria.
“When someone is in the state of illumination he acquires natural theoria of beings, which means that he sees the uncreated energy of God within creation. He who is illuminated has the energy of God within him and sees the energy of the Holy Spirit in all created things.”
Certainly there are degrees of spiritual knowledge, depending on someone’s spiritual state.
“One stage is when you see it through faith. That is to say, you understand the energy of God within creation when you accept the teaching of the saints. The next is when you see the energy of God within creation, when you participate in the illuminating energy of God.”
—Metropolitan Hierotheos of Nafpaktos. Empirical Dogmatics, Volume Two
http://orthognosia.blogspot.gr/2015/01/the-uncreated-energy-logoi-of-god-in.html

Living in the Presence of Christ. Saint Porphyrios (Bairaktaris) the Kapsokalyvite

Life after Death A description of the first 40 days after death A Homily by St. John Maximovitch of Shanghai and San Francisco.

God aims to save us Saint – Nectarios of Pentapolis