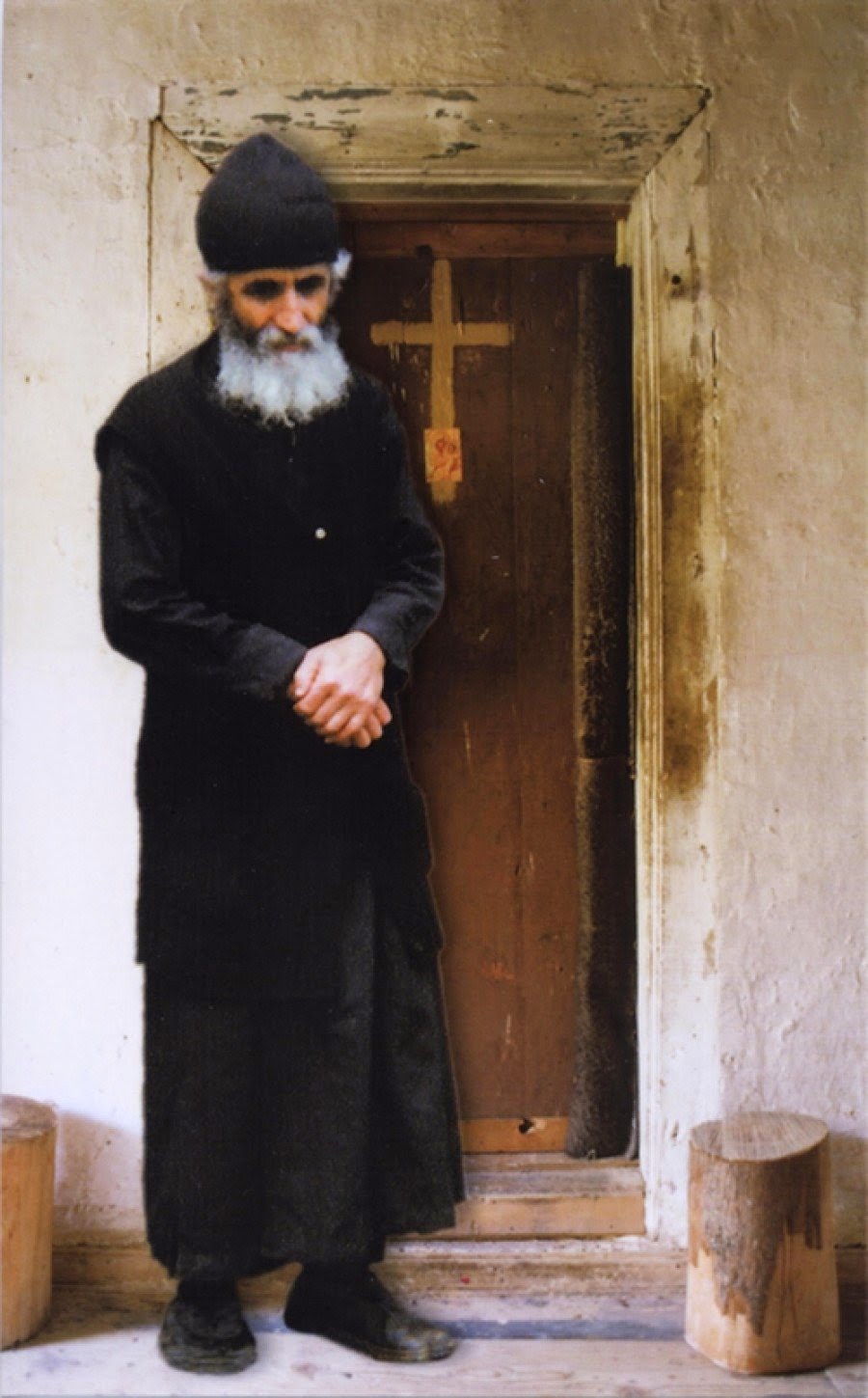 TWO RECENT MIRACLES PERFORMED
by Saint Paisios
ANGELS OF LIGHT & DEMONS OF DARKNESS
Six years ago, a young man went to confession many times.  He was an anarchist; he wore earrings and took many drugs.  One of his friends had a book about the life of Elder Paisios.  In December of 1996, two years after the death of the Elder, this friend of mine was visiting the bookstore of the Convent at Soureti, Greece.  At the bookstore there was a couple with their little daughter, and their father, two middle-aged women and a young man.  Suddenly they all heard a loud cry.  One of the middle-aged women collapsed on the floor and began hitting herself and crying out wildly.  She was twisting her head around violently.  It was truly a terrible sight to watch.  The woman with the little girl left the bookstore while the other people there attempted to help the woman who was on the floor.  The woman on the floor bellowed out with a wild, unbelievable male voice: “I will take over you guys who don’t follow me, I will show you.  It won’t be long now and I will place my mark 666 on the hands of all of you.  You will all worship me, you losers and idiots.”  The voice also said many other insults against human beings.
The woman on the floor began to sputter and appeared afraid.  The male voice that was coming out of her was saying: “Paisios, don’t burn me, don’t burn me. I know that you want to send me back to the bowls of hell (Tartarus).  That is why this loser brings me to all these Monasteries. Why Paisios are you helping her? You’re burning me, you’re burning me.”  After saying this she began to squeal louder. She was hitting her head so hard against the floor that we were afraid that she would injure her skull. At this point, it became very clear to us that she was being afflicted by a demon.
She cried out again saying “aah.”   The demon’s voice spoke again saying: “Now Maria has come too, you are burning me Paisios.”  She let out a big cry and then she became motionless as if she had fainted again.  The people standing around her approached her with caution and then covered her with their coats.  As soon as she calmed down they lifted her up from the floor, she opened her eyes and was crying softly.   She then gave thanks from the depths of her being saying: “I thank you Elder, I thank you my God.”   She kept saying this over and over again with great gratitude.  She got up and stood before the icon of Jesus and the Holy Mother and then shouted in a loud voice: “My God, my God how did you accept me into your midst, me, the unworthy one?  I thank you, my God, I thank you Elder Paisios.  I am not worthy of this help, my God.”
The scene was very moving.  Later she greeted my friend with gratitude and left. It was very evident that the woman had been possessed of a demon.  As she left, she turned and told us that she had dreamed of the Elder Paisios and he said to her in the dream: “Come to my grave and I will make you well.”  When she came to the Monastery she asked were the grave of the Elder was situated.   She venerated the Elder at the grace and then went to the bookstore where the whole incident unfolded before our eyes.
A SECOND RECENT MIRACLE PERFORMED BY ELDER PAISIOS
IN MOSCOW, RUSSIA
THE GRAVE OF ELDER PAISIOS AT THE MONASTERY OF SOURETI
The following story comes to us from Ms. L.N.M., a Russian physician from Moscow.  She tells us:  “I suffered some terrible injuries in an accident and I became blind in one eye.  My family brought to the General Hospital of Moscow.  The hospital was filled to capacity, so they put me on a gurney in the hallway.  That night, I did not sleep at all. I prayed and I was very worried.  Towards the morning when I was in a state between sleep and wakefulness, Elder Paisios came to me.  I saw him clearly and recognized him because I had read a book about his life.  He covered my head with a handkerchief and disappeared.  At that very moment I realized that I could see with my blind eye.  The doctors did not have to do anything.  I was kept in the hospital from February 4th to February 11th   2002.  I thank God for His mercy toward me and for the intercessions of Elder Paisios.
Transcribed and edited from the web site, Άγάπη έν Χριστώ, Love in Christ by:
+Fr. Constantine (Charles) J. Simones, February 4, 2015, Waterford, CT., USA, 860-460-9089, cjsimones300@gmail.com

“Acquire the Spirit of Peace and a thousand souls around you will be saved.” St. Seraphim of Sarov

ELDER PAISIOS: SAY THIS PRAYER EVERY DAY AND GOD WILL ALWAYS BE AT YOUR SIDE

Why is there evil in the world?On the justice and judgements of God. Elder Paisios the Athonite

The pains of Love…Saint Isaac the Syrian