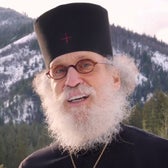 Το απομαγνητοφωνημένο κείμενο του π. Ναθαναήλ.
Who Leaked COVID-19?
ABC recently aired a bonifide scoop:
Quote:
“The US Military knew as far back as November that a contagion was getting out of hand in Wuhan.”
Yet China at the time knew of only a few cases it had assumed was an unknown viral pneumonia.
China saw nothing “devastating” back then of which the Pentagon had suspiciously anticipated.
So where did COVID begin?
Independent virologists from Japan and Taiwan specified that the genome sequencing and mutation data tag it to America.
What then did the US Military know and how did it know it? [Clip]
[”It was just yesterday that President Trump said that no one had even heard of the virus two months ago. But we are now learning that as far back as late November, American military medical investigators overseas sounded the alarm to officials right here at home about a contagion that was sweeping through Wuhan. There were concerns that the virus could be devastating were detailed in a Report, and multiple sources have described that Report to our team.”]
The National Center of Military Intelligence—writers of the Report—foresaw the “contagion” fully a month before China even knew it had a lethal virus on its hands.
But the lid is on at the US Pentagon. [Clip]
[”You said at the top of this interview that the Pentagon has been ahead of the curve every day, and you mentioned January, but did the Pentagon receive an intelligence assessment on COVID in China last November from the National Center for Medical Intelligence of DIA?”
“Ohh, I can’t recall wha, uh, George, but our, our–we have many people who watch this closely. We have the premiere infectious disease research institute in America, eh, within the United States Army. So our people who work directly with this issue watch this all the time. As you know, the first patient, uuhhh, in the United States, uh, was discovered in late January.”
“But that’s in January because reportedly this assessment was done in November and it was briefed to the NSC in early December assessing the impact on military readiness, which would of course make it important to you and the possible spread in the United States. So you would have known if this was briefed to the National Security Council in December, wouldn’t you?” “Yeah, I’m, I’m, not aware of that. Ahh, ahh, I will tell you again, our folks work this all the time.”]
He’s Secretary of Defense and didn’t know about the Report?
Israel knew all about it.
I mean, Israel and the Pentagon are joined at the hip, you know.
Fact is, 300 US soldiers took part in Wuhan’s “Military World Games” in the last half of October, and I betcha Israeli moles were burrowed deep within the US troops.
Five of the US soldiers—likely more—had to be treated at the “Wuhan Jinyintan Hospital” for “flu-like” symptoms of high fever and chills.
But voila!
Suddenly they were treated for “malaria,” and likely given hydroxychloroquine pills!
Last time I checked you get malaria in sub-Sahara Africa, not central China.
Also truly, forty two of the “Wuhan Oriental Hotel” staff, where the US troops were staying, came down sick with then undiagnosed COVID shortly after the games.
The hotel is 400 yards from the “Huanan Seafood Market”…the alleged hub of COVID-19.
Yet none of the hotel staff who came down with COVID had any ties to the Seafood Market.
No bats, by the way, were sold there, nor even lived in the region.
And the “Wuhan Institute of Virology” was a good ten miles away.
So when the spokesman of China’s Foreign Ministry proposed that the US military brought the virus to Wuhan, it was because the participating US troops had trained at Fort Detrick in Maryland last summer when prepping for the games.
For at Fort Detrick’s Biodefense Labs, a “Cease and Desist” Order was issued by the CDC in mid-July, due to the Labs’ violations of containment procedures of deadly germs.
The order was issued while the troops were still training.
Who then leaked COVID-19?
A wet market, where there were no bats?
A Chinese research lab, ten miles away?
Or, the US military—whose troops trained at Fort Detrick where its bio labs carried lethal germs—and whose troops stayed at a Wuhun hotel where its soldiers AND hotel staff got COVID-19.
Which stands a chance of admission?
An educated guess could hatch a feasible suspicion.
Especially when an Israeli military Intel officer, Dany Shoham, who originally, and solely claimed—without any evidence—that the “Wuhan Institute of Virology” was part of a ’secret biological weapons program.’
And the Jew-owned media licked it off the propaganda floors.
Believe a Jew and you’re locked indoors
And a military dictatorship—funded and governed by Jewish bankers and their court physicians—will affix a tattooed vaccine while you’re down on all fours.
https://www.brighteon.com/5e34cb4a-af15-44d1-b20c-032890bea888
IN ENGLISH BROTHER NATHANAEL, CHINA, CORONAVIRUS, In English, SPREAD, US

When you find a soul akin to your own…stay with it. Elder Thaddaeus of Vitovnica

The acts of the enemy Saint – Nicholas Velimirovich

Man comes into the light of this world crying, he passes his life in weeping and sorrows, and he leaves the world in tears and pain.

Why do people divorce?